Well, our little babe is a heathen no more! This past Sunday we welcomed Madeline into the club of Catholicism after the 5pm Teen Mass. While there were frustrations along the way in terms of planning out her baptism – everything turned out perfectly and we were so happy that we could schedule the sacrament after the Mass where we participate in music ministry. We wanted to make sure that not only would our families be able to witness her baptism but that all of our youth group teens and  band could see it too. Some of the youth have known us since we were engaged and a handful since we were dating so for them to witness our little girl become a part of the Body of Christ was some awesome, crazy, full circle, kind of stuff.

Let’s get this party started.

I would just like to say that apparently our child was an absolute angel during Mass and even took a little cat nap pre-sacramental graces. During her moment of glory? Not so much. She was pretty worn out by baptism time and was over the matching lacy bonnet/pretty much everything ever. But because I’m more of a glass half-full type of person, her grumpiness could have been a whole lot worse and the really big cries didn’t happen until…

Money shot. For a baby who adores a good bath we were not so into the ice-water forehead dousing of spiritual graces.

This girl is set in the godparent department. Her godmother is my college roommate, Kristen. The girl who has been a pivotal part of my personal spiritual life and fearlessly lead our Catholic group in college. I couldn’t imagine a better example for our little lady to look up to. Kristen is pretty great and can teach Madeline all about our Blessed Mother as well as the how-to’s of picking out a good bottle of wine. While her godfather couldn’t make it for the weekend (we missed you Ryan!) we were extremely thankful to have Eric’s brother stand in for him. 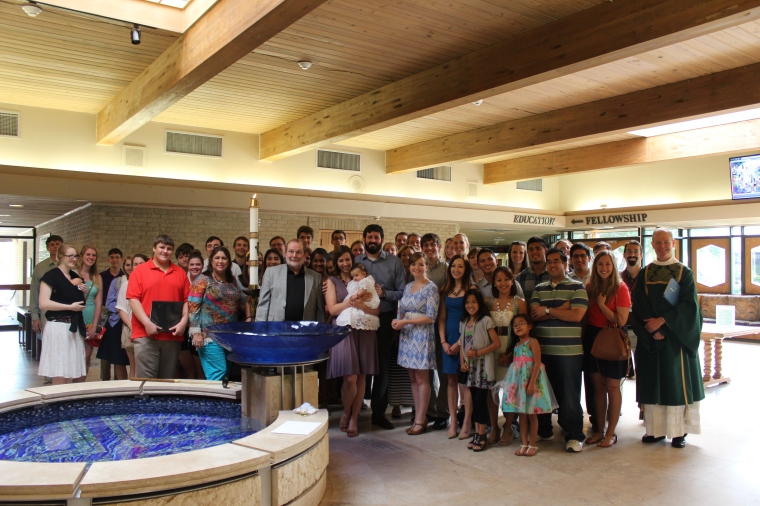 To give you a sense of how many people were there to support us on Sunday we snapped this little photo. We are framing this baby for sure. I really don’t think I’ve ever seen so many people attend a baptism and we are pretty much the luckiest to be a part of such an awesome community. So many teens stayed after mass to watch and between family, friends, and the band it was a pretty insane crowd. Talk about love!